A peace meditation is organized for Syria conflict daily at 4:45 PM UTC.

However, the situation in Syria is becoming more critical. Turkey has started military actions in the northern Syria.

This may also lead to more than 10,000 Islamic State militants previously held being released to the area.

President Erdogan also threatened that he will release millions of Syrian refugees and allow them to start making their way to Europe if there is any intervention to Turkey's military actions.

Meanwhile, Russian President Vladimir Putin is going to organize a reconciliation talk between Syria and Turkey, as an attempt to end the conflict peacefully.

It is important to note that the real occult reason for the Syrian conflict is the battle for the Syrian goddess vortex which is one of the most important key energy points in the planetary energy grid.  Whoever controls that energy point is very close to controlling the majority of the energy leyline system on the planetary surface. Whoever controls the energy leyline system has direct access to the global consciousness of humanity. 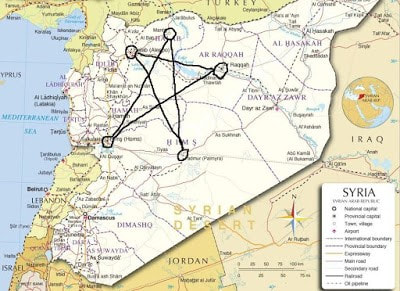 The next few days are going to determine the future of Syria.

Therefore, we are going to do the peace meditation for the Syria conflict every 4 hours, starting from Tuesday, October 8th at 12:45 AM UTC.

The following table shows the times of the meditation for selected time zones:​
​

1. Use your own technique to bring you to a relaxed state of consciousness

2. State your intent to bring peace and healing to the situations in Syria.

3. Visualize a pillar of pink Light, emanating from the Galactic Central Sun and then descending down through your body and deep into the center of the Earth.

4. Visualize this Light flowing through your heart and then through your hands directly to everybody involved in the potential conflicts of the Turkish army in northern Syria, harmonizing everyone and bringing peace. Let the pink Light then flow onwards, healing all other conflicts worldwide.

5. Ask the Goddess presence (the divine feminine) to direct energies of peace and harmony to all unresolved situations regarding the potential conflicts of the Turkish army in northern Syria and everyone involved in it. Let these energies then flow onwards and heal all other conflicts worldwide. Allow these energies to continue to flow through your heart and then through your hands into these situations for a few minutes.
Those who feel guided, can help supporting the healing of the Syria pentagram by visualizing this piece of ancient Halafian pottery rotating over the whole Syria pentagram, strengthening the Goddess vortex there and removing all darkness from the region.

This piece of Halafian pottery, made 7000 years ago, contains sacred geometry codes that activate Goddess presence and remove darkness from all four directions.
​ 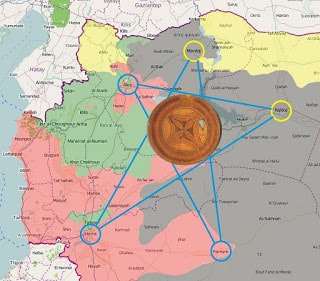 Goddess wants peace and peace it will be!
Please use social icons at the top right corner or copy a link to this page to share on social media and invite your friends to join us in this meditation.